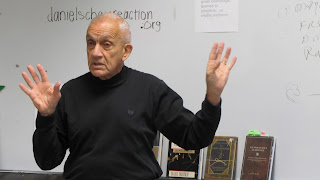 Few will dispute the fact, that Fred Sheeheen is one of the great civil rights activists in , and a devout supporter of public education. The Sheheen’s are heralded by many as a well-respected multi-generational family of politicians from . On December 7th, the “It Kids” had the opportunity to meet the former Director of the Higher Education Commission and ask him about his son’s recent run for Governor and where higher education is trending.
The students asked, “Growing up as you watched your son mature, when did he realize he had an interest in politics? And what was it like for you to have your son run for the highest office in the state?” Sheheen shared with the class that young Vincent Sheheen didn’t have an interest in politics; it wasn’t until high school and a run for student council that his interest was peeked. 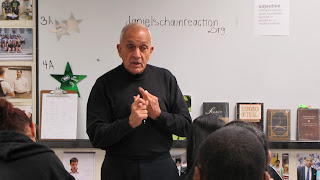 Sheheen shared with the students that the states higher education community has room for improvements with their technical infrastructure and operations. During the Q&A, one student in particular asked, “’s higher ed has been criticized for not having a “uniform” state accounting system. We’ve looked at other states (, , and ) that use a common “chart of accounts” where one accounting system is applied and shared. How much more efficient would it be if they all used the same sort of system so there wouldn’t be so much redundancy and overlap?” He agreed that there is a need to integrate the higher ed institutions like other state agencies do. The students were curious as to why the higher ed institutions continue to operate so independently with their stand-alone computer systems as opposing to using the common computer system that state government now has. Sheheen noted that the benefits of sharing a common system would enable decision makers to extract information more readily for budgetary decision-making. 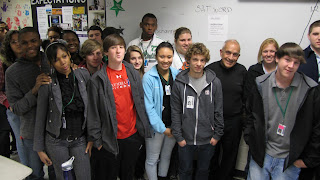 The class wrapped up the discussion by posing this final question, “How legal was it for the Budget & Control Board rather than the General Assembly to impose higher ed tuition rates on construction projects?”  Sheheen said that individual colleges and universities set the tuition rates and not the Budget & Control Board. He was pleased that all of the states higher education institutions responded to the building moratorium and lowered their tuition rates to help make continuing education more affordable for all .
Posted by Silver Fox Report at 12:00 PM