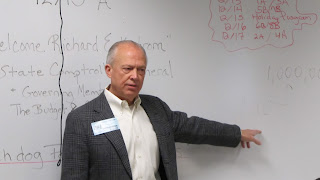 State Comptroller General Richard Eckstrom visited the “It Kids” classroom on December 15th and talked about the importance of citizen involvement in government. The students learned about the need for transparency and about how the public can use “transparency” websites to hold elected officials more accountable for the tax-payer money being spent. Eckstrom shared with the students that good governing isn’t about being a Democrat or Republican, it’s about being reasonable and fair.
The state’s chief accountant fielded questions from students. One of the students asked, “Governor Elect Nikki Haley has been tagged as “ in a skirt” and you’ve been called “Mini Mark.” Are these compliments or criticisms? Eckstrom quipped that it depends on if you like Governor Sanford or not; that he personally took them as compliments.  He also shared with the class that he supports abolishing the powerful Budget & Control Board, on which he is one of five governing members, and allowing the Governor to oversee many of the Board’s duties. 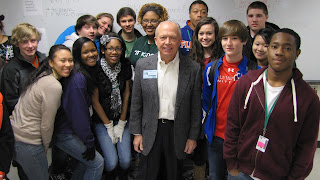 The Board met this past week and the students were quick to ask about several of the controversial issues that were debated at its meeting. Another student asked, “This is the fourth year that the state’s prison system will run a deficit. In fact they’ve projected that it will run over $7.5 million dollars short in its current budget. In total that’s over $77 million in shortfalls the agency has racked up the past few years. Is it time for a change in leadership at the Department of Corrections?” Eckstrom explained that the prison system has grown significantly and that the agency director has trimmed spending in many areas and has done a lot with a limited budget.  Ironically, Governor-Elect Haley announced since Eckstrom’s visit she has identified a new director for the state’s prison system for when she takes office in January. 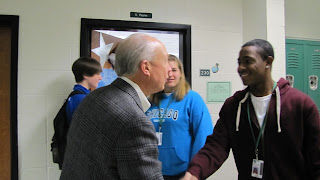 Students pointed out that state government faces a long-term budget gap in which ongoing revenues will not be enough to pay ongoing spending commitments. Part of this “budget gap” results from commitments for retiree benefits. Eckstrom told the students that state government has major budget problems in lots of areas and that the state retirement system was one of them. He reported that the new Governor is developing a long term workout plan.
He also explained that citizens have a right to know how their tax dollars are spent and that with the click of a mouse anyone can now search spending details by agency or school district. The students have visited the Comptroller General’s transparency website and they shared thoughtful suggestions to further improve the detail of financial data being provided. “We’ve read that other states (i.e. , , and ) allow citizens to search financial information by agency or by function of government. The function of government is a classification that’s been established to indicate the primary duties, responsibilities, and services performed by each agency of state government. Would it serve well to extend this same opportunity to our citizens as a matter of additional information?”  General Eckstrom said the website will constantly be changing to include enhancements like that, and he was very impressed with the thoughtful questions the students asked.
Posted by Silver Fox Report at 8:00 AM