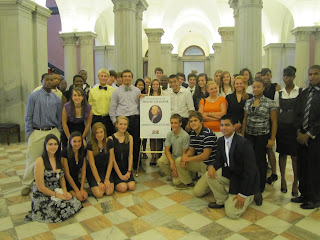 The Honorable Matthew J. Perry joined high school students from across at the State House September 17, for the second annual Constitution Day Observance James Otis Jr. Lecture at the State House.
“What an incredible opportunity for our students to listen to one of the greatest civil rights lawyers in the history of ,” said Kelly Payne, Dutch Fork High School Social Studies teacher.
This year’s program focused on the 14th Amendment, which formally defines citizenship and protects a person’s civil and political rights. The amendment has been garnering a lot of national attention recently as it relates to the children of illegal immigrants right to citizenship. “My students have been studying this national issue and had a chance to take a compelling look at our nation’s history live from the floor of the South Carolina State House,” Payne said, “It was an honor to participate in this historic event with more than 125 other students from communities throughout South Carolina.” 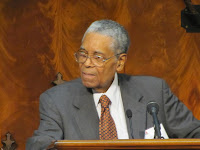 The lecture is named after James Otis, Jr. who was one of the most influential lawyers in American history. Every high school in the state was invited to send one student as a prominent “James Otis Scholar.” Dutch Fork’s scholar for 2010 was senior, Taylor Moore. Mr. Collins of the American Board of Trial Advocates graciously included 40 additional students from to participate in the September 17th event.
Collins & Lacy, founding partner Joel Collins and others with the South Carolina Chapter of the American Board of Trial Advocates (ABOTA) Foundation started the program last year with an emphasis on educating young people.  “The lecture is designed to acknowledge the wisdom, courage, mistakes and successes of our predecessors who made critical contributions to develop our country’s right to self government and preservation of individual liberties, “ said Collins, who also teaches a course on the Constitution at the University of South Carolina Honors College.
Federal law requires all schools that receive federal assistance to have a program about the Constitution on or around the anniversary date of the signing of the Constitution, which was September, 17, 1787.  SCETV provided live coverage of the Constitution Day event from the State House floor.
Posted by Silver Fox Report at 4:35 PM