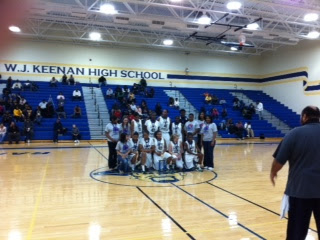 The holiday break is normally a restful one for students. This would hold true in most circumstances except for high school basketball players. Teams typically use the holiday break to work on added schemes while developing some team chemistry prior to heading into the conference schedule. The Lady Silver Foxes of Dutch Fork High used the holiday break to participate in the Taco Bell Invitational at . They played three games and were victorious over all three teams earning them the tournament title for the second consecutive year.
In the first game, the girls defeated Marlboro County High School 71-33. The semifinal game drew the home team W.J. Keenan Raiders. They used solid team play and a relentless defense to defeat the Lady Raiders 64- that game Alaina Coates scored 31 points and Donnesha Shuler had 24 points. This win advanced them to the tournament championship game. This was an anticipated match-up between the Lady Silver Foxes and the defending AAA State Champion Myrtle Beach Lady Seahawks. This would prove to be an excellent early season test for the Lady Silver Foxes. Each team had their share of outstanding plays with the Lady Silver Foxes gaining the momentum in the second half and pulling away from to gain the victory 66-54. Donnesha Shuler finished with 23 points, Alaina Coates 15, Shelby Curtis 12, Kyla Wigfall 8, Sierra Stokes 7, and Audra Snipe 1. Donnesha Shuler was named to the all-tourney team and Alaina Coates named the most outstanding player.

DF remains undefeated and improves to (10-0). The Lady Silver Foxes return to action on Jan. 4 with a non-region game at home against Lugoff-Elgin. Both girls' and boys' team return to region 4-4A action on Jan. 11th  in a long awaited match-up against AAAA State Runner'sUp, Spring Valley High.
Posted by Silver Fox Report at 9:00 AM