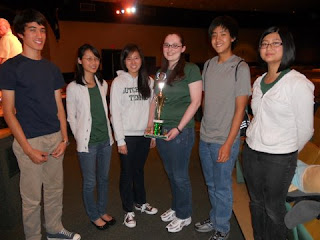 In a rebuilding year with only one experienced player, the Dutch Fork Academic Team took third place in the Conway State Invitational Academic Team Tournament, just one place away from qualifying for national competition.

After a year without a team, a Dutch Fork AP English teacher stepped forward to coach the team and began recruiting in September. One student - junior Jennifer Iacono - had been on the team as a freshman and answered the call to offer her experience and leadership to the team. Other students who completed the team are Gloria Wang, Justin Moore, Zach Wang and Jessica Wang. The team practiced weekly in Mrs. Jackson's room and decided they were ready to try a competition just for the experience. They had decided that this was a rebuilding year and that the focus would be on learning in preparation for next year. 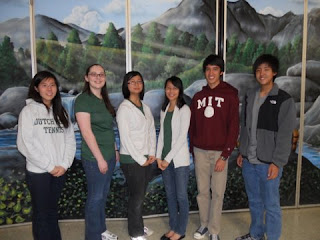 Saturday, they realized just how good they really were. The team won four out of six matches in the first round of competition, then advanced in the single elimination afternoon brackets to take the third place trophy.

The trophy is on display in the front office.
Posted by Silver Fox Report at 2:30 PM