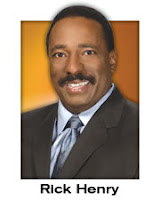 On Thursday February 17, 2011, Mr. Rick Henry, the Sports Director for WIS TV in Columbia, SC will be visiting Dutch Fork High. Mr. Henry will address students during the first two blocks of the day in the senior cafeteria. Mr. Henry will be sharing his wealth of knowledge as it relates to journalism, career opportunities in this field, and experiences he has enjoyed over the past decade.

Rick first joined WIS in 1988 as an anchor/reporter. He became Sports Director in 1996.  Rick became the first African-American to serve as Sports Director for a South Carolina Television station.

Rick is an award winning journalist. He was named 1999 Sportscaster of the year by the South Carolina Broadcasters Association. In 2005 his Sportscast was selected as the best in South Carolina by the Associated Press. Rick has also received two prestigious Emmy awards. In 1998, Rick was named to the University Of South Carolina College Of Journalism's "Diamond Circle", joining a national group of esteemed individuals chosen for outstanding contributions to their field.

We are indeed honored to host Mr. Henry and look forward to the awesome experience that he will provide for our students. All student's and faculty are encouraged to attend Mr. Henry's sessions.
Posted by Silver Fox Report at 5:00 PM