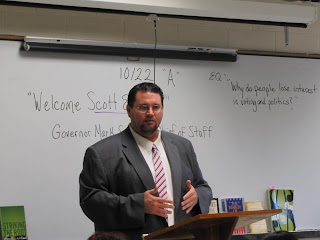 By: Kelly Payne, Social Studies Teacher
Scott English, Governor Sanford’s Chief of Staff fielded tough questions from Kelly Payne’s Current Issues class last month. In the waning days of his final term in office the students asked what the twice-elected governor’s legacy will be and what some of the biggest challenges were working in the administration. English said Sanford was willing to work to reform state government, to make it leaner, more accountable and more responsive to the needs of the citizens, and that he will be most remembered for his common-sense reforms and fiscal conservatism. While the students agreed that the governor was a driving force for fundamental change in the way things are done in , his visionary reforms were often met with contention and ended up in a Legislative gridlock. 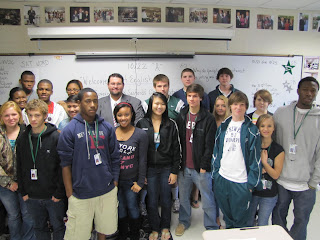 One of the students questioned the consistency of ’s stalwart fiscal policies asking, “For years the government of has used industry targeting or targeted tax incentives in an attempt to create jobs and stimulate economic growth. Governor Sanford has been vehemently opposed to this. In fact he’s argued that although these policies are common among state governments, the efficacy of these policies has been called into question over and over again. Why did he help seal the Boeing deal? Isn’t that hypocritical?” English noted has always stayed true to his political roots. The Governor has brought a clear and consistent focus on the bottom line and the equation of what people pay in for government is what they get out.
The students were inquisitive about the extensive media coverage of his personal failings while serving as the state’s top leader. They questioned the Governor’s Chief of Staff asking him, “The appeal for a moral cleansing of the Governor resonates with the passive-negative character in its emphasis on not doing certain things. It also reinforces the character attuned to moral appeals to duty. Shouldn’t the public realize that the Governor is only human, and with all man’s vulnerability to moral error, the pendulum should not swing too far? Or is it legitimate to hold to a higher standard?” English quickly responded that elected officials should be held to a higher standard and that we are all human, and humans are not infallible. Rightly or wrongly, his time in office will be remembered by the pejorative remarks from the summer of 2009, when he left and traveled to . The students also realized that the “business-as-usual” mindset that exists at the State House is dire need of change.
We appreciate the time Mr. English took from his busy schedule to speak to our class and to help better prepare our students for their future.
Posted by Silver Fox Report at 8:23 AM