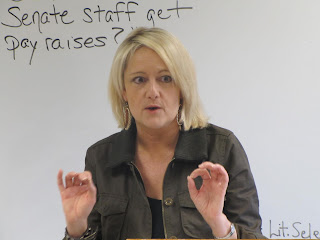 The Dutch Fork High School “It Kids” got a special visit from Ashley Landess, the President of the South Carolina Policy Council, and Governor Elect Nikki Haley’s newest member of the Fiscal Crisis Task Force, on Friday November 12th. The South Carolina Policy Council has been described as a “think tank” that studies and recommends good public policy for the Legislature to use to pass laws that will benefit our state. Ms. Landess, an expert in developing public policy spoke about government accountability, spending transparency, and why an open government is necessary to have a good democracy. The class discussed what role, if any, the government at all levels has in contributing to our current economic crises, and the effect government spending will have on improving our state or federal economy. The President of the Policy Council opened up the floor for a healthy debate asking the students to address any concerns they have as we embark on a new chapter in our state’s history. A litany of issues was debated including whether or not the five member Budget & Control Board has outlived its utility and should be abolished. One student stated their concern that lobbyists are a necessary part of passing good laws, but tax dollars shouldn’t be used to pay for their services. The apex of the debate focused on the issue of public education and what can be done to improve it in South Carolina. The students concluded any change will start with changing the antiquated system we currently have in place. Several students expressed their desire to have more choices in the current curriculum and others challenged student fees.

All involved in the heated debate agreed that in order to move South Carolina toward a brighter future we must aspire to make government work better for all citizens.
Posted by Silver Fox Report at 8:00 AM